I spent the second day of the year reading Gillian Flynn’s Gone Girl. Varying thoughts ran through my head, from the sweeping proclamations (I will never, ever get married) to the self-deprecating musings (no one’s going to kiss me the way Nick “tastes” Amy huhuhu).

And of course there’s the series of what-the-fucks and how-the-hells since Gone Girl is a crime thriller that, true to its genre, delivers the right amount of revelations that made me want to keep on reading.

The premise is simple: Amy Elliot Dunne goes missing on the day of her fifth wedding anniversary. An investigation unfolds and everything pins her husband Nick Dunne as the prime and only suspect.

The chapters are told from Amy’s and Nick’s perspectives. It must be noted that their relationship is not in its ideal state and both characters have a truckload of baggage on their own (and hatred towards each other), making them unreliable narrators.

Reading Gone Girl was like taking a peek at a severely dysfunctional relationship and hoping that I never ever be in one. It was frustrating to witness: Girl does this but means to do that, Guy wants this but Girl does not. Ugh. I wanted to think that it’s only fiction and Amy and Nick are characters that have exaggerated flaws so they could fuel a more gripping tale. Unfortunately, I know real human beings in less-than-ideal relationships — my parents included — so Gone Girl may be a little extreme but the conflict is not entirely tangential to reality.

Mysteries and crime thrillers have never been my thing so I don’t know how Gone Girl compares to other novels of the same genre. It was a thrilling read, sure, but it does not seem like it broke the conventions of the craft. It didn’t feel formulaic tho, I’ll give it that. But like I said, I’m no thriller chick so malay ko naman.

Last thing: Ray advised me to watch the David Fincher movie first before reading the book, else I may not be able to appreciate the movie. I told her I’d rather think the movie is shitty than have my reading experience spoiled. She said books can never be ruined but books always ruin movies. I didn’t listen to her (hehe) but I will watch the movie tonight.

To cap this off, I think one should read Gone Girl without the alon-sa-papawirin expectations (i.e. don’t expect Jimboy-bakla-pala twists). And if you haven’t watched the movie yet and you’re the type who reads, I suggest you do my way and go book-first. 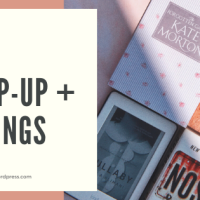