It took me so long to process the whole shebang. My knees felt wobbly, and my heart started palpitating. Vamos Argentina! What a pleasant, pleasant surprise!

I was not able to watch the full match, unfortunately. I had to run some errands after work, so I left at 4pm when the extra time was just about to start.

I knew I wouldn’t be able to know who wins until I get home so my mind was definitely zoning out while on the road. I even got honked at while switching lanes (sorry!).

The whole time, I was reminding myself to expect the worst. Robben may have sneaked in a screamer during extra time, or RVP may have repeated his Flying Dutchman stunt against Spain. I imagined myself looking at gifs of Messi and Higuain hugging and crying, or of a devastated Di Maria consoling a sobbing Mascherano.

I thought I would have to write a blog post filled with despair—but boy how happy I was to be proven wrong!

Right when I got home, I opened my laptop and googled the results: still a 0-0 just like when I left, but Argentina won 4-2 during the penalty shootout. Tim Krul was not subbed in, and Sergio Romero became a hero overnight. I sat on the floor, closed my eyes and smiled—so this is what it feels like to be slapped with good news, I thought. Nice.

I searched for game analyses, for updates on what happened during the extra time. I kept replaying the last minutes of the game, just to get even a minute sense of ecstasy the actual Argentinians must be having right now.

After an excruciatingly long break—two days! TWO DAYS!—the quarterfinals has begun today. And it’s Germany and Brazil who successfully inched their ways to the semis.

This makes me sad for a couple reasons:

1. I saw Griezmann cry and I wasn’t there to hug him (thanks Mavuba for being my proxy):

2. James “don’t call me James” Rodriguez also cried. He shared a “tahan na” moment with David Luiz and it was heartwarming, in fairness.

1. Interesting how all the goalscorers today were backline peeps: Hummels for Germany, and Silva and David Luiz for Brazil. All goals were also from set pieces, so there’s that.

2. Silva got booked today, which means he won’t be playing in the semis. CHAKA! He’s one of the best defenders out there, and Brazil needs him. Ang suwerte ng Germany!

3. Neymar is also out! I admit I’m a bit shocked at this one. He took a knee kick to his back and had to leave around the 80th minute for treatment. Being the assumera that I am, I thought he just dove to waste time. You can’t really blame me because Neymar has always been “theatrical.” Too bad he was indeed hurt, and he too won’t be able to play against Germany. Suwerte talaga ng Germany!

4. I’m trying to adopt a “neutral” attitude so I won’t feel too bad if Argentina says bye-bye tomorrow. Something like hoping for the best and expecting the worst. I just wish they don’t suffer a 4-0 loss like they did against Germany back in 2010. I just want them to play well and put up a good fight. 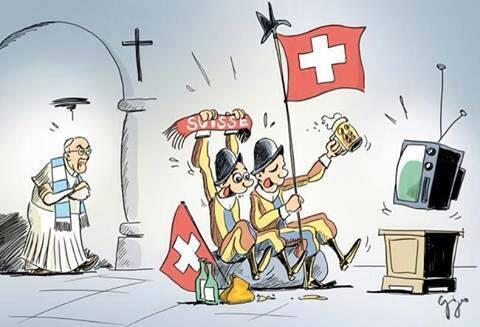 I was too devastated to post anything yesterday (choz lang, I was in class the whole night). After the games, I messaged a friend to tell him about the Group H results: Germany 1-0 USA, Portugal 2-1 Ghana. The US advances because they beat Ghana and Ports in goal differential.

Ghana played without Boateng and Muntari, and Gyan couldn’t carry the team just by himself. Even Portugal played like they didn’t care anymore, like they knew hell had to freeze before Ghana concedes four more goals. Of course CR7 looked shattered, and Beto was sobbing on the bench.

It’s extremely sad to see senior players go without even advancing to the next round. This could very well be their last World Cup, and they’re leaving too early. Oh well. It’s all over now, and we have to move on.

That said, I hope the US leaves this cup in the most un-glamorous way. I hope Belgium beats them 10-0. I haven’t really followed Belgium’s matches, but I’m counting on the fact that they’re from Europe hahaha. And in the off-chance that the US wins, they would then be facing Argentina. And if the US beats Argentina—nah, who am I kidding, that’s not gonna happen (o mahabaging panginoon ama namin sumasalangit kaaaaaa).

Now that there are less games to follow and only a little more than two weeks to go before the finals, I feel like I have so much time in my hands to do more important things. It’s time to go back to doing stuff for myself—time to score my personal goals (wenk wenk wenk).

This September, I doubt I will be quitting my job to go full time in school. I still want to take night classes, but I’m not sure if the school is going to allow me to take Math 30-1 without taking the prereq 20-1 (they don’t offer Math 20-1 for the night sched). I need to talk to an advisor to know if I can avoid the 20-1 route. But before that, I first have to study so I can prove that I can handle the 30-1, right? I will then be spending this weekend relearning linear equations and shit—and hopefully I don’t get distracted.

Another thing I want to have by this summer: a credit card. I don’t have credit history whatsoever. I’m thinking of applying for a student credit card, but I’m not sure if they’re gonna consider me a student as I only study part-time. Maybe I should apply for a legit card but, how can I get approved without an existing credit history? This shit bothers me and I know I should talk to someone from the bank. I don’t know, I guess I really just like putting things off for later. And I know I have to change that, so yeaaaa.

I’m also thinking of doing volunteer work, but sometimes I feel too lazy to go out. Going to class two nights a week is such a chore, what more if I have other things to do? If only I have friends so I can enjoy going out of the house. But I wouldn’t have friends if I don’t go out, eh? Hay. This, I would say, is a frikkin first-world problem. Ang arte ko lang, leche.

So there: study math, get a credit card, and maybe do some volunteer stuff. Plus an Argentina victory in the World Cup. Not that bad, eh?

It’s more like 10 days and not 10 years actually, but…yeeeeeeeey! Now I can do other stuff without feeling guilty for putting off school work. Yeeeeey!

My boys will be facing Switzerland in the next round. Pffff, easy peasy Japanese-y. Although their backline has a Buckingham Palace-sized room for improvement, Di Maria and Messi—especially Messi—have been doing great for the team. Hope they make it to the semis (because I’m damn sure they’re gonna make it past the Round of 16). Don’t disappoint me, please? Mwah mwah.

Speaking of disappointment, I sincerely hope Team Imperialist disappoints tomorrow. Nothing against the people of America; I just really want to see the US lose. Come on, universe. They’re the world’s most powerful nation, let them lose this time! Let Ghana in so they can slap their corrupt officials with a win. Not that it will eradicate corruption or poverty whatsoever. I just want to see more Africans—and no US—in the next round.

And oh, by the way, there’s also this widely-talked-about biting incident by Luis “handball™” Suarez during the Uruguay-Italy match:

It’s a huge deal, apparently. One, because this is not the first time Suarez bit a player on pitch. And two, because you’re not supposed to bite people on pitch or anywhere else, unless you’re defending yourself from assault or you’re doing kinky stuff.

FIFA has already started an official investigation on the incident. If proven guilty of going full Edward Cullen against Giorgio Chiellini, Suarez may face a possible two year ban from international matches. What I don’t get is, why the hell would he bite an opponent? He could have easily pushed Chiellini to the ground, or headbutt him a la Pepe. Other players tackle, they push and shove, some kick and punch. But bite? Hmm. Odaxelagnia, maybe? Eeeghh.

What else, what else? Oooooh. My World Cup cutie of the day: Antoine Griezmann. He plays for France (who’s moving on to the next round as well) and for Real Sociedad in La Liga. Use Google for other info.